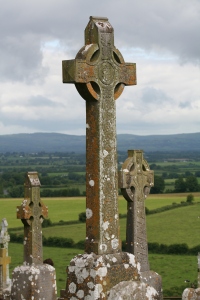 #BlogBattle brought to you by Rachael Ritchey, author of the Beauty Thief

The prompt this week is prophet.
Genre: Fantasy YA
Word Count: 1000

The Reluctant Profit
By Tracey Delaplain

Moiré lifted her cloak and stepped over the beckoning puddle, hesitating just long enough to catch her reflection. “Don’t look. Do not look,” she chided in the direction of her reflection. Failing to heed her own advice, her gaze locked on the water which was now swirling in the stagnant air, a vision taking hold against her will.

The small boy was ashen with rasping breath, sweat dripping from his brow and his life light fading. She had seen this child in the village but didn’t recognize the woman kneeling at his side wailing. The mother’s grief, however, was unmistakable and universal.

Moiré reached a hand toward the reflection but the vision cleared and the child disappeared leaving her spent and bereft. Falling to the damp ground Moiré begged, ” Why me Auntie? What good is a vision with half the pieces missing? Why?” The air was thick and fetid; Clara, cold in her grave, did not answer.

A fortnight had passed since her Aunt’s death and Moiré’s visions had increased in magnitude every day since. Thinking their time together would be endless, she had skipped out of her lessons with Clara more often than not. All the pleading in the world couldn’t compete with Moiré’s reluctance to carry the mantle, “I am no prophet,” she had insisted pushing back at her beloved Aunt.

The silence of the burial ground was breached by the snap of a twig and a vaguely familiar voice. “A vision was it?” the traveler extended his hand offering assistance, “May I?” Moiré shook her head no and rose from a crumpled heap of skirts and cloak with as much dignity as possible, swiping at a tear.

“Did you not see me coming?”

“You have me at a disadvantage I’m afraid, my head was down when you approached, I did not see you.”

“That’s not what I meant and you know it. I have frequented your dreams many times, Moiré. “I am at your service ma’am,” not offering his name. He extended his hand palm up in the same manner he would approach a skittish horse. The man was dressed in a dusty black cloak, his boots scuffed and well-worn; a costume of sorts she sensed. He was too tall and broad for an ordinary traveler. He was out-of-place in space or time; she wasn’t sure which and was convinced that she could care less.

“You have the look of a bard,” turning away dismissing him with the insult, “your tale does not ring true. Good day Sir.” His handsome face and piercing violet eyes were perhaps familiar but she did not dream. Dreams were pleasant escapes for other people, a charming manifestation of ordinary wishes. She had been cursed with visions. “You know nothing of my dreams,” her voice cracking with a deep sadness, for she had once dreamt of a normal life with ordinary thoughts and every day challenges.

He continued as if he’d read her mind, “You aren’t normal and it’ll do you little good to deny your destiny. You’ve scarcely learned anything, wallowing in your childish rebellion.” Moiré kept walking, her heart pounding, “How did he know my name, only Clara called me Moire?” she wondered.

His voice softened, “Are they not painful Little One, the visions?” Her steps stuttered and he knew she was listening, “The visions will keep coming, as will I. You can learn to control them.” Under his breath he whispered, “If you weren’t so pig-headed.”

“I heard that. Be gone,” she commanded and waved a hand in dismissal.

“Call me when you grow up, Sweetheart, if there’s still time. I fear your gift may well destroy you.” He could not walk away despite his anger. Clara had warned him that she would be his greatest opponent.

She will test your patience but you are the only Teacher who can reach her. Our people will be lost without a prophet. I have failed, my love was too protective. She needs your warrior’s strength to succeed.

He reached deep for a weapon she would understand, “Silence, let the lessons begin. You will learn or perish.” Showing no mercy for the willful Priestess, he bent his visions in her direction, firing in rapid sequence. As he suspected she was helpless against the onslaught.

Her neighbor, Mrs. Fitz, crying and rocking alone in silence where Mr. Fitz should be.

Mick lying face down in the mud, a hoof print on his back.

Her best friend, Kate, lying in a pool of blood, an empty baby blanket clutched to her breast.

Images of death and secrets and vile crimes whipped in and out of her head leaving her breathless.

“Stop, please make them stop,” grabbing her throbbing head she collapsed under the burden. “I can’t help them; I’m nothing in the face of their suffering.”

Her despair tugged at his heart. He reached for her and she accepted his hand in temporary surrender. “Moiré, we mortals suffer, it is known. You can’t stop the suffering but you can learn to control what and when you see. Together we will set boundaries. You were born to bridge the gap between man and the Gods. Without limits your visions will destroy you. We do not ask this of you.”

“You see things and invade my dreams. Why don’t you play the Prophet?”

The traveler lifted a brow, pleased, “So I have not broken your spirit, I see. You have a warrior’s blood and I will show you no mercy,” he promised.

“Enough, Moiré. You must learn to close your mind to our people’s daily lives but open yourself to receive the messages from the ancient elders and to translate the prophecies of the stones. Our ordinary burdens are made lighter with guidance from the ancestors. You are the channel. I can not go where you go. You alone can save our people. Let me teach you, for it is written, you are The Prophet.”